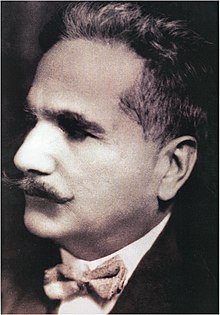 Muhammad Iqbal, known as Allama Iqbal, was a poet, philosopher, theorist, and barrister in British India. He is held as the national poet of Pakistan. He has been called the "Spiritual Father of Pakistan" for his contributions to the nation. Iqbal's poems, political contributions, and academic and scholarly research were distinguished. He inspired the Pakistan movement in Subcontinent and is considered a renowned figure of Urdu literature, although he wrote in both Urdu and Persian. Iqbal is admired as a prominent poet by Indians, Pakistanis, Iranians, Afghans, Bangladeshis and other international scholars of literature including the west. Though Iqbal is best known as a poet, he is also an acclaimed "Muslim philosophical thinker of modern times". His first poetry book, The Secrets of the Self, appeared in the Persian language in 1915, and other books of poetry include The Secrets of Selflessness, Message from the East and Persian Psalms. His best known Urdu works are The Call of the Marching Bell, Gabriel's Wing, The Rod of Moses and a part of Gift from Hijaz. Along with his Urdu and Persian poetry, his Urdu and English lectures and letters have been influential in cultural, social, religious and political discourses. In the 1922 New Year Honours, he was made a Knight Bachelor by King George V. While studying law and philosophy in England, Iqbal joined the London branch of the All-India Muslim League. During the League's December 1930 session, he delivered a speech, known as the Allahabad Address, in which he pushed for the creation of a Muslim state in north-west India.

Share your thoughts on Allama Muhammad Iqbal's poems with the community:

Know another great poem from Allama Muhammad Iqbal? Don't keep it to yourself!

Enter our May Contest to win cash prizes!

Enter our monthly contest for the chance to win cash prizes and gain recognition for your talent.
5
days
13
hours
40
minutes
127 entries submitted — 23 remaining

A poem in which the first letters of each line spell a word is called _______.