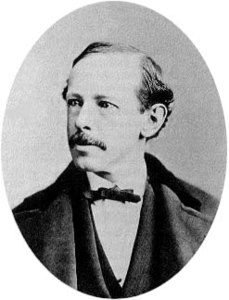 Horatio Alger Jr. (; January 13, 1832 – July 18, 1899) was an American writer of young adult novels about impoverished boys and their rise from humble backgrounds to lives of middle-class security and comfort through hard work, determination, courage, and honesty. His writings were characterized by the "rags-to-riches" narrative, which had a formative effect on the United States during the Gilded Age. All of Alger's juvenile novels share essentially the same theme, known as the "Horatio Alger myth": a teenage boy works hard to escape poverty. Often it is not hard work that rescues the boy from his fate but rather some extraordinary act of bravery or honesty. The boy might return a large sum of lost money or rescue someone from an overturned carriage. This brings the boy—and his plight—to the attention of a wealthy individual. Alger secured his literary niche in 1868 with the publication of his fourth book, Ragged Dick, the story of a poor bootblack's rise to middle-class respectability. This novel was a huge success. His many books that followed were essentially variations on Ragged Dick and featured stock characters: the valiant, hard-working, honest youth; the noble mysterious stranger; the snobbish youth; and the evil, greedy squire. In the 1870s, Alger's fiction was growing stale. His publisher suggested he tour the American West for fresh material to incorporate into his fiction. Alger took a trip to California, but the trip had little effect on his writing: he remained mired in the staid theme of "poor boy makes good." The backdrops of these novels, however, became the American West rather than the urban environments of the northeastern United States. In the last decades of the 19th century, Alger's moral tone coarsened with the change in boys' tastes. The public wanted sensational thrills. The Protestant work ethic was less prevalent in the United States, and violence, murder, and other sensational themes entered Alger's works. Public librarians questioned whether his books should be made available to the young. They were briefly successful, but interest in Alger's novels was renewed in the first decades of the 20th century, and they sold in the thousands. By the time he died in 1899, Alger had published around a hundred volumes. He is buried in Natick, Massachusetts. Since 1947, the Horatio Alger Association of Distinguished Americans has awarded scholarships and prizes to deserving individuals.

Share your thoughts on Horatio Alger Jr's poems with the community:

Know another great poem from Horatio Alger Jr? Don't keep it to yourself!

Enter our May Contest to win cash prizes!

Enter our monthly contest for the chance to win cash prizes and gain recognition for your talent.
4
days
5
hours
26
minutes
131 entries submitted — 19 remaining

"It was many and many a year ago, In a kingdom by the sea."